Olive tree is a plant that has always been present in man’s life. In the caves inhabited 40,000 years ago around the Mediterranean, old olive kernels were found. As with other plants and animal species, the domestication of the olive tree took place during the Fertile Crescent Moon Era, when the birth of agriculture and animal farming was born. (at the end of the last glaciation ten thousand years ago). 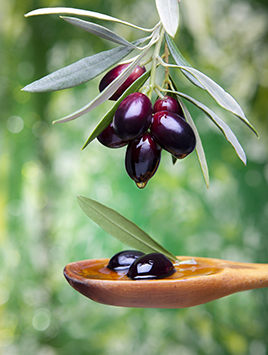 Oil was very precious, easy to store and to carry. Egyptians employed it for mummification, consecration of kings, medicine, etc. During Classical Greece period, the golden age of oil began with its myths (especially Athena myth). Throughout Greece, oil was considered to be the most important agricultural product. But its food use was scarce, it was more employed for lighting, body care and cleaning. During the centuries the Greeks carried olive trees and oil in the colonies of Magna Greece along the coasts of the Mediterranean. Until the Romans came and discovered the delicate flavour of the oil and made it a source of calories and fat fundamental in their diet. They were the first to make this decisive food choice about oil. Within 5 centuries, with the extension of the Roman Empire, the food culture of oil increased. There was no villa without an olive grove and an olive-press. The olives had to be picked green and immediately crushed. Some advice of great Roman writers about oil production would be really significant still today!

After a long period of wars, cold and famine, we have to wait for the 11th century and witness a new expansion of grapevines and olive trees. In the Renaissance, oil coming from the South gained again all its importance for lighting and industry. Thanks to the pressing demand for oil, Apulia became a great olive grove. In the 20th century and during the industrial revolution, olive oil was replaced by petroleum, losing importance in industrial use. It is during this period that Italian emigrants brought the use of olive oil in the US, in Australia and New Zealand.

Until 1986, Italy was the only olive oil producer in the Community of the 6Countries and the world’s largest producer. Apulian production was enough to keep this record. Then, with the Spain’s entry into the EEC and its five-year development plans for olive groves, Apulia lost the record.

Select the fields to be shown. Others will be hidden. Drag and drop to rearrange the order.
Click outside to hide the compare bar
Compare
Compare ×
Let's Compare! Continue shopping